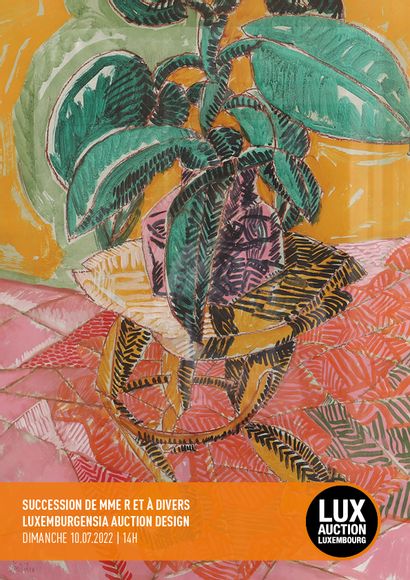 Estate of Mrs. R and various Luxemburgensia Auction and Design

This Sunday, July 10, 2022, we will have the pleasure to find you for this new auction

this new auction for the little eclectic!

An important number of design and contemporary lots will be dispersed to start this auction, with one of the most emblematic artists of the 20th century Keith Haring with this very nice Subway Drawing estimated between 5 000.00 € and 10 000.00 €.

For world renowned contemporary art: an aquagravure by Robert Combas, a 3D collage assemblage by Eric Liot, a shark plane by Sorayama, dollars by Banksy, a drawing by Damien Hirst, and the crocodile by Richard Orlinsky.

Artists from our nearby region with a musical unicorn by Peggy Dihé, a painting by Kingsley Ogwara and an exclusive oil on canvas "Baroque Fountain" by Camille Hilaire born in Metz in 1916.

We will continue with some lots of Asian Art porcelain, thangkas and paintings on silk.

The artist Christian Charvet will sublimate the woman with a small dozen bronze sculptures signed and numbered.

Rare antique paintings will be presented, notably an oil on parquet panel from the Flemish school of the 18th century, in the taste of Antoon Van Dyck (Antwerp 1599-1641), another oil on canvas by Carlo Dolci (1616-1686) and a remarkable Louis XV style desk bearing the stamp of KRIEGER concerning antique furniture.

We will end this auction with a very nice vase by Daum and some old books.

He is an expert approved by the Chamber of Experts of the Grand Duchy of Luxembourg.

Present for 12 years on the territory, he opened his own auction house,

We use cookies to provide you with a better browsing experience, perform site traffic analysis, and deliver content and advertisements most relevant to your interests.

By allowing these cookies, you agree to the deposit, reading and use of tracking technologies necessary for their proper functioning. Read more about our privacy policy.